Although it might be more cost-effective to consolidate six Nordic computing centres into one, the Nordic distributed model provides a unique set of competencies. According to Dr Josep Flix, the key man behind a new evaluation of Nordic Tier 1 cooperation, these may prove critical for the worldwide LHC network’s capacity to handle large volumes of data from CERN. 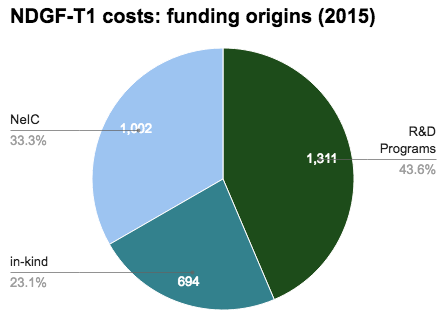 The Large Hadron Collider (LHC) particle accelerator at the European Organization for Nuclear Research (CERN) produces such vast amounts of data that there is not enough local capacity to analyse it all. Raw data is therefore distributed to supercomputers at 11 different Tier 1 centres. In the Nordic region, CERN data is analysed through joint operation of a Tier 1 centre that makes use of computing power from six different Nordic institutions across Denmark, Finland, Norway and Sweden.

The Nordic Tier 1 centre is the only one using this kind of distributed model. The Nordic e-Infrastructure Collaboration (NeIC) is responsible for running the centre and coordinating its activities. To ascertain the extra costs of having computers at six different locations rather than one, the NeIC board commissioned an evaluation of Nordic Tier 1 cooperation.

“The level of performance in the distributed Tier 1 model has been as good as the others,” says Dr Flix, who has carried out a new evaluation of the costs of the distributed Nordic Tier 1 centre. He is the manager of the Spanish Tier 1 centre, located in Barcelona. “This means that it does not matter where the resources are located. However, there are some additional costs in having a distributed collaboration.”

Dr Flix estimates in the evaluation that the annual operational costs could be cut from roughly Euro 3 million to Euro 2.3 million by consolidating the six centres into a single location.

“The report was very thorough,” says a pleased Pekka Lehtovuori, chair of the NeIC board. “It clearly showed that the distributed Tier 1 centre is not as cost-effective as the centralised centres can be. However, the report also points out some of the benefits which are not easy to measure in euros, for example collaboration and readiness to develop services in a distributed environment. These are competencies which are increasingly important in future global or European research infrastructure services.”

The evaluation shows that the estimated savings of consolidating the Nordic Tier 1 centre roughly correspond to the in-kind contributions from the six participating institutions. The actual savings to the national funding agencies would thus likely be less.

In the current model, the Nordic Tier 1 centre benefits from being part of a larger-scale high-performance computing centre at Nordic research institutions. At the same time, says Dr Flix, there are political challenges associated with transferring national funding for operation across national borders in order to fund a joint, physically co-localised centre.

Not least, the Nordic centre’s unique expertise – acquired from running a distributed centre – is very valuable for future methods of analysing large amounts of data. This could be significant when the CERN cooperation upgrades the particle accelerator to the High-Luminosity Large Hadron Collider.

“Already now we can foresee that with the high-luminosity era, we’ll have a factor 100 increase in data. Even though we know that we can benefit from our developing technology, this won’t be enough,” says Josep Flix. “Therefore, we need to join forces across borders in order to confederate our data and resources. And we can learn from the Nordic way of doing it.”

A number of possible scenarios

The evaluation report compares a number of possible scenarios for how the Nordic Tier 1 centre may be operated in the future. Cutting the total from six centres to four, i.e. keeping one centre in each participating country, could save roughly Euro 400 000 per year. An alternative scenario is to consolidate the Nordic centre into one country but continue to have all the participating countries fund and manage their own share of the hardware involved. This kind of model could save an estimated Euro 300 000 per year. Finally, marginal savings of Euro 125 000 per year could be achieved by having the NeIC assume operational management but maintain the system of distributed resources.

“The board will consider the analysis carefully in order to find out how we can introduce some savings to the operational costs of the Tier 1 and still maintain most of the benefits of current collaboration,” says Pekka Lehtovuori.