Juha Törnroos participated in a staff exchange last year and had the opportunity to work in Barcelona for eight months, starting in September 2017 and ending the last day of April 2018. Juha is working in ELIXIR Finland and through the exchange he had the opportunity to collaborate with the Spanish ELIXIR Node. He also works in the NeIC Tryggve project funded by NeIC and the ELIXIR nodes of participating countries. Tryggve develops and facilitates access to secure e-infrastructure for cross-border sensitive biomedical data. He applied for the exchange during spring 2017, and only a few months later he and his family, including wife and three poodles, packed their bags and drove all the way to Barcelona. 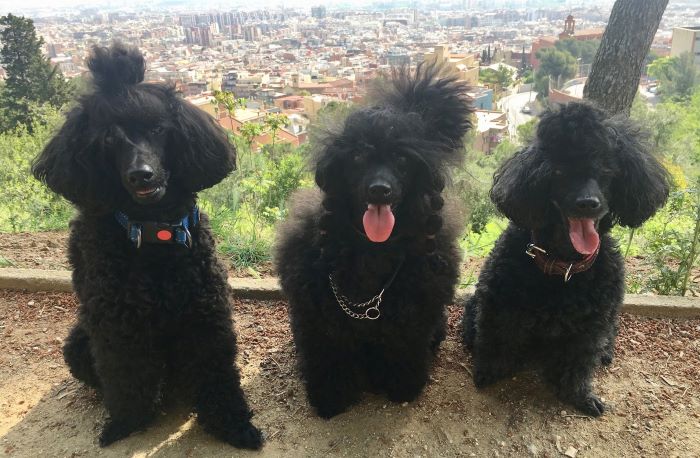 The poodles Tico, Liinu and Ninni enjoyed the walks in the Parc Guinardó although at times it was quite hot for a black poodle.

How did the idea of participating in an ELIXIR staff exchange in Spain come to mind?

"The Head of ELIXIR Finland and a co-worker of mine, Tommi Nyrönen, told me about the possibility to do a staff exchange. At first, we only talked about Hinxton, where the ELIXIR Hubis located. The idea of the exchange itself was born then, but the idea of Spain was born solely out of personal preferences. Coming from the Nordics, I wasn’t exactly jumping with joy at the thought of rainy Hinxton and wished to go live somewhere warm. Then, among other cities, Tommi finally suggested Barcelona. The Centre for Genomic Regulation, CRG, in Barcelona is a collaboration partner in NeIC Tryggve project Sensitive Data Archiving deliverable, and through the NeIC Tryggve project I was already familiar with some of the people working there. CRG is also a partner institution of ELIXIR Spain, but it was Tryggve that had created the collaboration within which I did the exchange."

"When Tommi and I decided that I would be going to Spain, we started thinking about the funding. This was in the beginning of year 2017. There had been some discussions about ELIXIR’s Staff Exchange Programme before, and I knew that five applications would receive funding through ELIXIR for a staff exchange. I wrote my application explaining my goals and reasons to participate in an exchange as well as argued why I should be funded, and submitted it around the turn of April and May. I had already organised all the practicalities and moved to Barcelona when I finally received the funding decision in mid-September."

The main goal of the exchange was to strengthen the collaboration between the Finnish and Spanish ELIXIR Nodes on sensitive data management. Four main concrete objectives were set for the exchange. The first objective was to further develop and adopt the European Genome-phenome Archive (EGA) technology in the Nordics, which is a service run by the CRG and EMBL-EBI. The second objective was also related to human genome data with the main focus on facilitating discoverability and reuse of this type of sensitive data. This was realized through collaborative effort around a human genome data discovery tool developed in the Beacon project, which is a result of a partnership between ELIXIR and the Global Alliance for Genomics and Health (GA4GH). The third objective was to support the uptake of ELIXIR AAI and ELIXIR-ES, as human data management is very sensitive and requires secure and trustworthy authentication and authorization solutions. The fourth and last objective was to leverage on the strong collaboration by exploring both countries’ clinical use cases of mutual interest within the domain of bio-imaging data, especially related to data transfers, analysis, storing and dissemination.

What was it like to work in another culture, especially from a Nordic point of view?

"I had been working with ELIXIR for three years, but I had always looked at things from a Finnish perspective. In Spain, I saw the same things being done, dealt with and discussed, but in a different way. From Tryggve’s point of view, the experience was fruitful for both me and the project itself. The filter that had existed between the organisations had disappeared, and I was able to participate from inside of CRG in the work in a completely new way."
"In the beginning, I was very curious and open to all the new things I encountered at work. Then, at some point, I learned that there are quite a lot of differences between the Finnish and Spanish work cultures. In the Nordic countries, in my opinion, the leaders trust on their team members’ expertise and that their team knows what to do. Leaders and managers are more like mentors in that sense. In Spain the leadership seems stronger and the leaders want to be on top of the matters their team is working on. Both cultures of course have their pros and cons and it’s important to understand the differences." 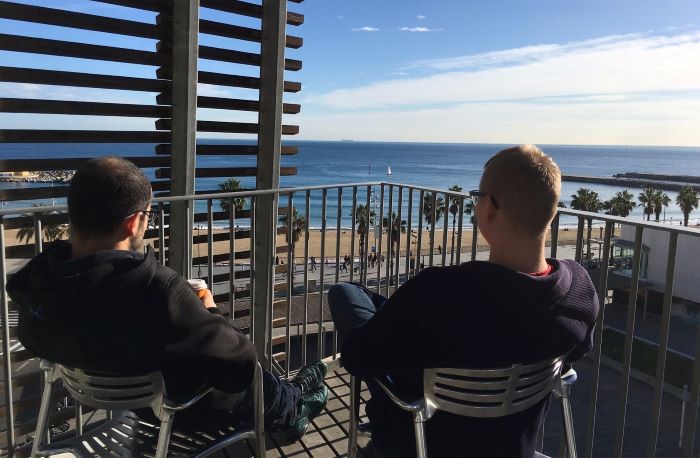 Having a coffee break at CRG’s balcony.

Do you think working on the spot in Spain was easier or more useful in your project than working remotely would have been?

"Well, there were pros and cons. Being in the same space as my colleagues made it possible to be more efficient than before. In my opinion, it made my job easier to be able to actually speak with the people on the spot. In order to achieve the goals that had been set, I needed to be there in Barcelona, so in that sense it was of course useful. But while being in Barcelona I had little clue of what was going on in Finland and at CSC even if it would’ve been beneficial to know. I worked mainly at CRG, but I also spent time at Barcelona Supercomputing Center. From time to time it was difficult to be working in three different organisations at the same time."

The main benefits of the exchange were of mutual interests for both countries. In Tryggve Nordic countries are developing technology for Sensitive Data Archive for EGA archive federation and the exchange allowed us to do the development together with EGA development team. This enabled the sharing of key technologies in both of these solutions. Collaboration on the Beacon project was also productive and ended up in having two new versions of the ELIXIR Beacon API released and a version of an API was also submitted for approval to the GA4GH. The exchange also enabled supporting the adoption of ELIXIR AAI and delivered a plan for EGA dataset permissions delivery via ELIXIR AAI to external services. The collaborative nature of the work also created a stronger connection between the Tryggve project and the ELIXIR partner nodes, resulting in a deliverable on sensitive data archives. Lastly, the exchange also enabled joint effort in writing H2020 project proposals where both partners were involved.

In addition to the main objectives planned ahead, the exchange also allowed Juha to work with various activities around the ELIXIR ToolsPlatform and especially familiarize himself with the implementation study “Development of Architecture for Software Containers at ELIXIR and its use by EXCELERATE use-case communities”. This study brought added-value to many aspects of Juha’s work. It provided for example support to an ELIXIR implementation study on Compute Platform resources and imposed new knowledge and hands-on skills on ELIXIR AAI work.

Was there anything you learned when working in a Spanish company that you wanted to take back with you to Finland?

"The exchange taught me how to work with different people. This has been and will continue to be useful to me especially at CSC and NeIC, where we have a lot of different cultural backgrounds. I don’t think there’s a lot in Spanish working culture that could be implemented in the Finnish one, nor the need to do that."

What would you say is the biggest personal gain?

"It was a great chance to build on my professional network. I made some very strong contacts, and even if the people would not be working in same projects in the future, the communication will surely still be easier. The same people from Tryggve project working with me in Barcelona are still in the project. Many of my current colleagues that have come onboard just recently, I already knew."

And what would be the biggest gain from the project’s point of view?

"Adding understanding between the project partners. I think me being in Barcelona made it easier for Finland to understand what Spain wanted to achieve in the project. Before I was there, it was a bit unclear for us at CSC."

The outcomes of the exchange are in the form of publications, webinars and video presentations, technical design documents and software releases. These were disseminated at ELIXIR workshops through presentations and poster sessions.

Besides NeIC Tryggve project, the partners involved in this work were ELIXIR Spain and ELIXIR Finland, Centre for Genomic Regulation (CRG), Barcelona Supercomputing Center (BSC) and CSC – IT Center for Science Ltd.

How would you develop the programme so that one could get more out of it?

"The timeline regarding the funding could be adjusted. As I said, I had organised everything, rented out our Finland apartment and got a new one in Spain, before the decision about funding was made. It meant that I had to live in uncertainty, as had my family too. I also think shorter, for example 3-month-long exchange periods could be useful. In my current project, it would be very useful to have someone from for example Sweden to visit Finland. I know the practical side of an exchange can be a bit challenging, but in my experience, it’s definitely worth it."

Should project workers be encouraged to participate in exchanges in the future?

"Without a doubt. It’s useful for both the person and for the project, employer, people involved in the project, basically everyone. I think organisations should support these exchanges as much as possible – it really pays off. I know my staff exchange was challenging to CSC’s HR department, but in the long run I believe that it was good for the company. And I have to add that CSC did an amazing job with the practical stuff regarding my exchange. I don’t think they could’ve done any better, actually."

Lastly: Was it worth it?

"Definitely. I have to say, though, that I would consider carefully before doing all this again. With the housing, the dogs, and the fact that my wife also had to organize her life to be able to join me in Spain, the practical side was slightly painful. I would, however, recommend staff exchange for everyone. I’m really glad I had the opportunity to experience this. I also want to thank all who made my exchange possible."