Abdulrahman Azab from University of Oslo’s Center for Information Technology (USIT) has started as a Senior Advisor in the NeIC Executive team on 1 November. Azab has a long history in NeIC, and he has previously acted as the Project Manager for projects PaRI and Tryggve2. In his new role, he will join the NeIC Project Management Office as a Project Owner.

– After having a wonderful experience in NeIC as a project member, then as a Project Manager, it is super exciting to join the Executive team and contribute to building NeIC’s strategy and new collaborations. Looking forward to new challenges! 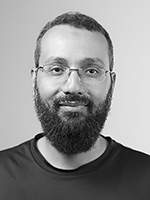 Azab has worked at the Department for Research Infrastructure Services at USIT from 2016, first as a Senior Engineer for four years, then as a Chief Engineer. In addition to his work in several NeIC projects, he has contributed to and coordinated work packages in (EOSC) European Open Science Cloud and PRACE (Partnership for Advanced Computing in Europe). As a science support specialist, he joined the LUMI Supercomputer User Support Team (LUST). He is also teaching a course on high-performance computing (HPC) in bioinformatics at the university’s Department of Informatics (IFI), where he has also previously worked as a Head Engineer as part of ELIXIR Norway.

Before starting his career at the University of Oslo, Azab worked as a research fellow at the Faculty of Science and Technology at University of Stavanger and as an assistant lecturer at the Faculty of Engineering at Mansoura University. He is an expert in lightweight virtualization, and is a member of the international HPC containers advisory council. Azab acted as a programme committee member in several IEEE (Institute of Electrical and Electronics Engineers) conferences and journals, and as a programme committee chair in the High Performance Containers Workshop (HPCW) at the International Supercomputing Conference (ISC) in 2019 and 2021.