Year 2022 marks the 10-year anniversary for NeIC. To celebrate this milestone, we will publish ten stories that showcase how NeIC has contributed to developing best-in-class e-infrastructure¹ services beyond national capabilities and enhanced the productivity of research in the Nordic Region.

The Nordic e-Infrastructure Collaboration, also known as NeIC, was established in 2012. NeIC facilitates collaboration on digital infrastructure within the Nordic countries and Estonia by providing experts coming from different countries, organisations and fields opportunities to work together. This Nordic collaboration on digital infrastructure had started already before NeIC was established. Since 2003, the Nordic countries have been collaborating on the Worldwide Large Hadron Collider Computing Grid (WLCG) at CERN, providing research computing and storage for high-energy physicists worldwide. The successful collaboration that started with the services offered by the Nordic Data Grid Facility (NDGF) was after some years expanded into NeIC, which was tasked to run the Nordic WLCG Tier-1 facility, also known as NT1. The initiation of NeIC made it possible to facilitate collaborations to benefit other science areas.

This story focuses on the ways NeIC offers Nordic and European communities opportunities and a reliable platform to explore, develop, and deploy innovative services for research. Our key instrument for enabling Nordic research excellence through collaboration are NeIC’s open calls.

In order to incubate a collective development of services and capabilities for researchers, NeIC designed a novel process for international collaboration projects. The primary tool for initiating projects are NeIC’s open calls for development projects. NeIC’s open calls invite consortia consisting of e-infrastructure providers, developers, researchers, and related communities throughout the Nordic Region to propose collaboration projects of joint Nordic interest. NeIC has also encouraged communities to prepare for development projects and other efforts with the corresponding invitations for community-forming pre-studies or workshops.

Special Advisor Rob Pennington from NeIC is very familiar with the open calls. Pennington has been working with NeIC since 2015, and his previous experience at the US National Science Foundation as a programme officer has been very helpful in understanding how to evaluate e-infrastructure applications from a wide range of communities. His colleague, Senior Advisor Johanna Törnroos, was instrumental in setting up the process and policies, drawing on her experiences at the Academy of Finland.

The NeIC policy for project selection: value to the Nordics

The open call process is an example of how we have implemented NeIC’s strategy to provide motivated people from all parts of the region opportunities to work together for a common, Nordic good. We do this by helping either existing collaborations or collaborations in the making to reach their goals while offering them an effective framework for conducting the activities as well as help in administration and management. Especially the degree to which NeIC collaborations are beneficial for the Nordic Region is highlighted when choosing which activities to fund.

The current policy for project selection was accepted by NeIC’s board in 2020 and first applied in the 2021 open call process. The policy describes the process used for evaluating project proposals and links the evaluation criteria to the four strategic objectives. 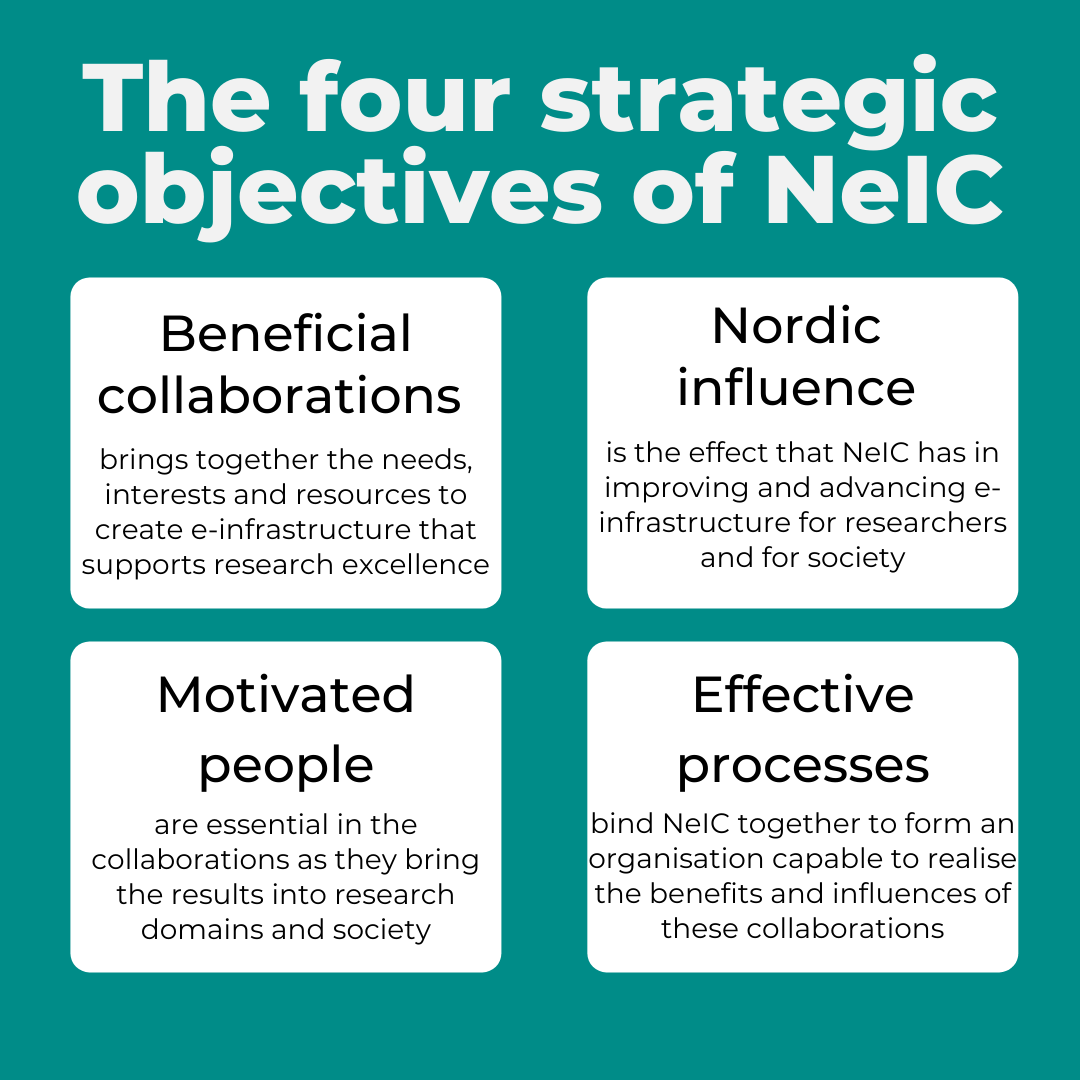 The policy for project selection, the evaluation criteria as well as the review templates used by the external reviewers are made available to the open call applicants when the call is announced. This enhances the transparency of the process. The project selection process consists of three separately executed phases:

– This process reflects the emphasis that NeIC places on working with high-quality projects that are important for e-infrastructure providers and users in the Nordic region. It was developed from the initial experiences in inviting Nordic e-infrastructure communities and providers to form collaborations through NeIC and has been used successfully to select projects beginning in 2019, Pennington says.

When a NeIC call is announced, the applicants are also encouraged to contact the NeIC helpdesk in case of any unclarities or questions before submitting their application. In 2021, the most frequently asked questions were collected to improve the process. In addition, a survey was sent to all of the open call applicants to collect feedback from the collaborations.

Number of applications on the rise

Between 2012 and 2021, NeIC has supported 22 projects. It all started with high-energy physics and NT1, but in 2014, NeIC stepped into a new area of research as a collaboration project on the development of sensitive data management, Tryggve, began. Tryggve started a fruitful collaboration with the Nordic ELIXIR nodes, which enabled not only technological development but also the development of a network of expertise among software developers in the area of sensitive data. In 2017, NeIC initiated several collaboration projects contributing to new fields such as high-performance computing, climate modelling and biodiversity, and in 2021, a NeIC collaboration is exploring the exciting world of quantum computing.

– As the interest in Nordic e-infrastructure collaborations has grown and changed over the last decade, NeIC has helped by providing opportunities for these new collaborations to form and grow into world-class efforts that reflect the strengths and capabilities of the Nordic region, Pennington explains.

In 2021, the number of applications received to the call was higher than ever before. A total of 11 applications were submitted to the call for development projects, and three applications were submitted to the call for community-forming pre-studies and workshops. Three projects were granted funding in September 2021, and two of these are already running: the third phase of CodeRefinery started in March and the new NordIQuEst project will kick off very soon, in April. The third project, Puhuri2, is expected to begin after the first phase of Puhuri ends in the summer.

As a result of the number and range of high-quality applications that were submitted in 2021, the 2022 call for development applications was focused on communities that had previously demonstrated the ability to work together in proposing the type of Nordic collaborations that were of high value and interest in the region. The 2022 call closed on 1 March, with five project proposals submitted. These proposals will be reviewed according to the project selection process, and the board is expected to make its decision regarding funding in September.

¹ Electronic or digital infrastructure consists of ICT (information and communications technology)-based infrastructures that enable advanced, collaboration-oriented research. Data infrastructures are relevant to most subject areas, and there is an increasing need for them to become interoperable across geographical and subject boundaries. (Source: Research Council of Norway)